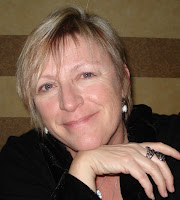 Crystal skulls, although in existence over 1500 years, were popularized by the movie Indian Jones and the Kingdom of the Crystal Skull.  Legend tells of a collection of 13 crystal skulls, gifted to humanity; harboring secrets pertaining to our creation, purpose and eventuality.  There is speculation aliens brought this information to the Mayans, who were astronomically very knowledgable.
"The myth suggests the orginal 13 skulls represent each planet of our solar system," says Carolyn McDermott, MHT, FNLP, gatekeeper and facilitator of crystal skull energy and knowledge.  "They are supposed to contain knowledge and wisdom about our destiny and ways for us to heal our planet and humanity.  When the time is right, all 13 skulls will be coming back together again, moving us forward into evolution."
"There are tens of thousands of skulls all over the world.  They are carved in Brazil and China.  The Black Forest, Germany has wonderful artisans that carved for many, many years.  I don't know if they still carve or not.  Apparently, these skulls were quite beautiful."
"In regards to how many Ancients are out there; two have been classified as such," Carolyn tells us.  "One is Sha Na Ra, discovered in an archeological dig in Mexico; named after a Mexican Shaman. Sha Na Ra, was tested by the British Museum who found no contempary tools used in carving that skull.  The other skull classified as a true Ancient skull is Max, having no indication of tool marks from modern technology."  (Below:  Sha Na Na, whose present guardian is Michele Nocerino Jesse.) 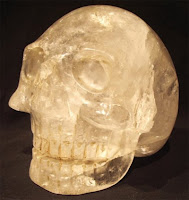 "The Mitchell-Hedges skull and Synergy skull are also considered Ancient," informs Carolyn.  "The Mitchell-Hedges skull had some controversy around it.  I heard they found markings from modern technology."  Considered to be one of the most popularly aclaimed and enigmatic crystal artifacts, the beautifully carved Mitchell-Hedges skull was originally believed to be unearthed in 1924 by
British explorer F. A. Mitchell-Hedges' daughter Anna, during an expedition of the ancient Mayan ruins of Lubaantun, in the British Honduras.  This story, later determined by the British Museum (having in their possession documents that verified the skull was purchased at a London auction in 1943) to be fabricated.  Although the skull's origin remains undetermined, its detail suggests a completion derived from up to 300 years of man-hours.  (Below: Anna Mitchell-Hedges in 2005.
Anna Mitchell Hedges died on 4/11/07 at age 100.) 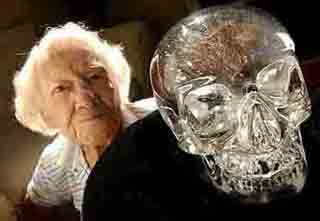 "To date, there are approximately four or five skulls considered Ancient," continues Carolyn.  "There is also a skull who's named Compassion and is apparently the skull of sacred feminine energy.  That skull is in the United States; as is the Mitchell-Hedges and Max (who also doesn't show any tool marks).  Many are in the States.  My thoughts are there are many Indigenous people who are holding many of the Ancients, using them in their sacred ceremonies; not revealing them until the time is right."

"I've been in the presence of the Mitchell-Hedges Skull, whose present guardian is Bill Homann; and Synergy, a spectacular skull whose guardian is Sherry Whitfield Merrell."  (See below.) 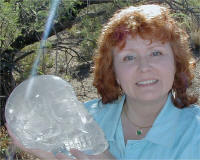 "We can't really say for sure where crystal skulls come from," surmises Carolyn.  "We don't have any cold hard proof.  We can speculate.  There are many, many gifted folks who channel information from the skulls, giving us a window into that mystery and mysticism.  The crystal skull draws so much emotion."

"Where is the best place to hide information?" asks Carolyn, expressing her thoughts (from a non-scientific approach) as to why these crystals were carved into skulls.  "You hide knowledge in your subconscious mind; your skull.  The conscious mind is responsible for short-term memory, will-power, rationalization and justification.  Inside, we hide all our wisdom, knowledge; everything that makes us so incredible. We always look externally to find answers to questions; outwards to find happiness and love.  We don't look inside at this giant wellspring of love, knowledge and wisdom.  We look everywhere else, but can't find it.  Carved into a crystal skull, nobody would look in the head.  It's the very place we don't think to look."

"The brain holds the mind; the mind holds everything.  The subconscious mind holds all the information from the conception of our souls.  Everything's stored; it's a massive computer," remarks Carolyn.  "Crystal skulls are store houses; transmitters storing information that take us places we'd never think to go.  They help us through life in a way that's constantly evolving."

Many believe the Maya calendar's completion signifies the evolution of our planet.  With euphoric wonder, humanity anticipates the discovery of the remaining Ancient skulls and secrets therein.

Click here to view our interview with Carolyn McDermott.  (Video presently not available.)